In late Q1 2022, we began to hear about a significant worker shortage. A March 29 CNBC report showed that the U.S. had 5 million more open positions than available workers. I’ve heard lots of people (many of them either hiring managers or retirees) complain that people are lazy and “don’t want to work.” But I think there’s more to the story than 5 million people suddenly realizing they would rather binge-watch Netflix than go to work every day.

I’ve uncovered four factors that more than account for the 5 million missing workers. None of them should surprise us. But we need to change the damaging “lazy worker” narrative if we want to have a shot at turning the tide on the worker shortage.

Remember the “retirement wave” conversations we were having before 2020? Every day it was said, 10,000 new Baby Boomers were “just one bad day away from retirement.” Experts were right on track with their predictions. Retirement numbers held steady for almost a decade, then dropped significantly in 2019. Some people wondered if the Baby Boomers would ever really retire. But then in 2020, new retirees more than doubled from the prior year, and still showed a marked increase relative to the overall trend. By my count, these “extra” retirees comprise nearly 1 million, or 20 percent, of the 5 million missing workers. 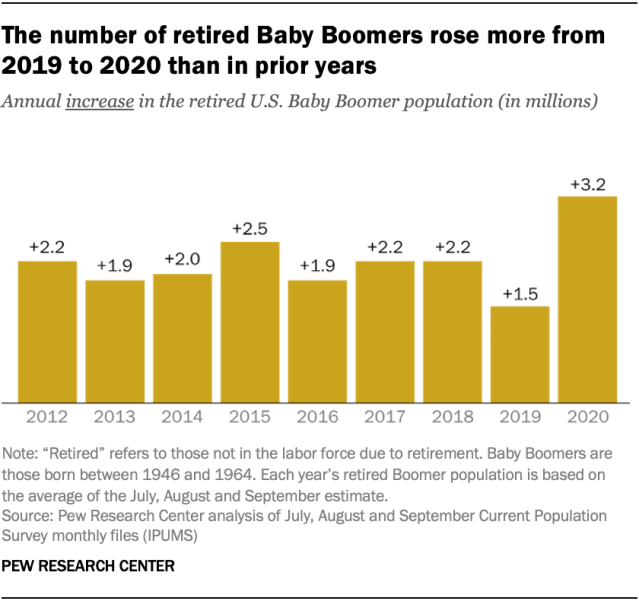 Whether immigration policy really changes from one administration to the next is up for debate. But the impacts of the pandemic on immigration are undeniable. Non-tourist visas dropped by roughly 50 percent in 2020. And we saw about 50 percent fewer new-arrival green cards that year. Together, that’s up to 1.2 million foreign workers who didn’t come to the U.S.

As recently as 2021, Reuters reported that the percentage of US workers who held multiple jobs was still rising. But something interesting started happening late last year that may have caused a change. Wages, specifically in the service sector, increase significantly. Would this cause a worker shortage? Not exactly, but let me explain why I think it’s showing up that way.

Rising Wages May Be Long Overdue

The federal minimum wage has held steady at $7.75 per hour since 2009. Some economists suggest that a floor of $20 or more would be necessary to keep pace with inflation. State and local governments have countered this stagnation (and boosted their payroll tax revenues) by setting their own minimum wage guidelines.

But with workers in high demand, especially in low-wage, service industry jobs, companies have raised starting wages. Late in 2021, we started seeing signs for $12 per hour starting pay at our local McDonald’s. (They’ve since increased to $15 an hour, adding childcare and weekly pay incentives.) Of course, wage fluctuations vary by industry and gains may yet be offset by rising inflation.

Anecdotally, employers who have already increased wages have noticed some interesting trends:

I would argue that we’ve had a worker shortage for much longer than we’ve realized. We just didn’t notice because one person was working two or three low-wage jobs at a time. Now that one person can make ends meet with just one full-time position. This leaves a vacancy or two for each person who drops the burden of a second (or third) job.

4. Direct and Indirect Impacts of Covid-19

Nearly 1 million Americans have died from Covid-19 as of this writing, approximately one quarter of whom had not yet reached retirement age. These deaths alone may account for 250,000 open positions in the workforce, not to mention the devastating toll on families and communities.

And we can’t forget that “Long Covid” may lead us to what Scientific American describes as “a tsunami of disability” among US workers. As many as one in four Americans already lived with a disability before the pandemic. Long Covid could add another 8 million or more people to those ranks. People with disabilities are less able to work by definition, but also struggle to secure jobs for which they are highly qualified. Even a conservative estimate here could account for the full worker shortage.

An understanding of any of these factors may lead us to real action. For example:

If corporate leaders assume “people are lazy,” we take away any power we have to guard against the problem. After all, there’s little we can do about other people’s internal motivations. Instead, we need to recognize the complex and interconnected external forces at play. Only then can we change course internally to meet our economy’s labor needs.